What are the most popular cat breeds? 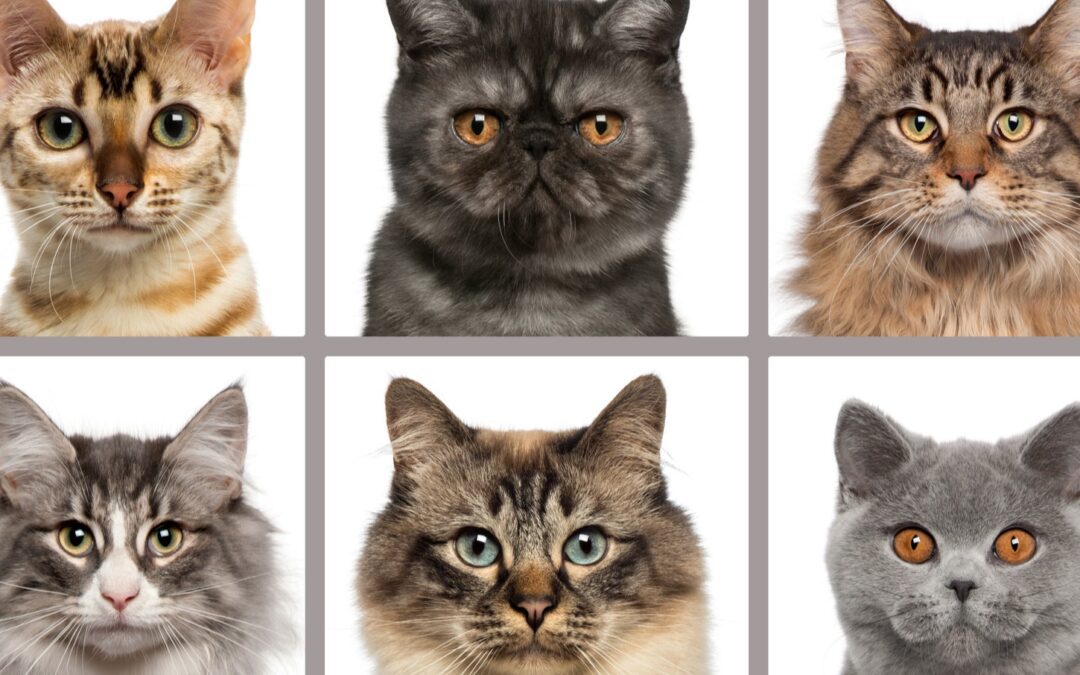 Everybody often talks about the fascination of dog breeds. When one of your friends says they’re planning to adopt a dog, the first question that comes to mind is: What kind of dog? But when another friend says they’re adopting a cat, the same question is not highly prioritized. In no particular order, here is a crash course on some of the most popular cat breeds today!

A “family favorite” and also known as “America’s breed” the American shorthair has the classic cat image. You’ve probably encountered them in the form of silver tabbies as they are the most common variance of the breed! They were first brought to the colonies by European settlers, dating back to the Mayflower in 1620. Early publications have stated that they are accredited to saving New England crops from squirrels and chipmunks! Today, they are known to be very adaptable and good-natured. Many of them are sociable but also enjoy being independent. All in all, they are a very ideal cat and will be a loving companion for the whole family!

Looking for a fluffy, large cat with mesmerizing blue eyes? The ragdoll is a beautiful embodiment of that! They are not only large but also quite muscular beneath their semi-longhair. Don’t let the glorious hair intimidate you though! They are actually easier to care for than you think! Ragdolls are a developed, hybrid breed coming into the world around the 1960s. Their personalities are very placid – they’re not easily upset or excited most of the time. However, they are certainly people-lovers as they often follow humans around. They’re also curious and you’ll find them not only cuddling on your lap but also on top of your books or computers. They are sure to make a cozy best friend!

Maine Coon cats are often known as the “gentle giants” They are the largest cat breed who also happen to be muscular with impressive hunting skills! They’re just so big and so fluffy that people often mistake them as dogs at first glance. But don’t be fooled, they are still good natured, playful, and easy to get along with. Maine Coon cats have a thick, double coat of long hair, and it requires special attention to prevent matting! They originated from Maine (what a surprise!), where their thick fur comes in handy for the harsh winters. It’s also said that some Maine Coon cats are attracted to water and may even enjoy occasional swims!

A kind of domestic short-haired cat, the abyssinian cat has a regal charm to it. Their stature and fur are easily distinguishable being fawn-colored and ticked. Unlike the last few cats, these cats don’t enjoy cuddling as much as others do. Abyssinians are very curious, courageous, and high-spirited! They’re are still quite affectionate though! They don’t hate people but would simply rather sit next to you than cuddle directly on your lap. They generally like to keep themselves entertained whether it’s by themselves or it’s just following you around the house. Because of this, it’s common for Abyssinian cat owners to get another cat as a companion to keep them entertained when they’re away! They are one of the oldest known breeds but its exact origins are still uncertain. Even then, their name comes from people assuming they come from Abyssinia (now Ethiopia)!

The Persian cat is very adorable, known for its long hair, round face, and short muzzle. As a result, they are lovingly referred to as one of the “smush-faced” cats. They have long and beautiful fur that come in practically any color. They are well-behaved and quiet in personality. They enjoy attention but don’t necessarily demand it constantly. They can be reserved at first encounter, but with time they can be an affectionate companion. Their origins can be traced back to the 1600s, likely in Mesopotamia (later called Persia and now, Iran)! Over the years, Persian cats grew to be common with royalty and royal families. You may often see them in TV and movies with this role!

The Exotic Shorthair is best described as a short hair Persian cat. While they are both very similar, Exotic Shorthairs are just more active and playful. They also have a “smushed-faced” and can appear more chubbier than Persians with their short fur! Moreover, their face shape is more rounded giving them a very sweet and wholesome expression. Exotic Shorthairs happen to be a cross-breed from Persians and American short-hairs. All in all they provide the best of both worlds being a gentle, playful, and cuddly cat all rolled into one!

A well-balanced and proportional cat are common ways people describe British Shorthairs. They are balanced appearance-wise and personality-wise! There’s not one physical attribute that sticks out to them. They are mature and calm, with the right amount of clinginess and playfulness. Just like American Shorthairs, they find their origins in Great Britain and are the representative cats there. In the same way, they were early hard-workers and were later brought to other places around the world. They are a good first-cat to get if you want one other than an American Shorthair!

The Scottish Fold cat is very charming and known for the way their ears “fold” forward and down. This gives an owl-like appearance to their round face shape! Their ears fold due to a natural dominant gene mutation that affects the cartilage. They originated in Scotland and are a cross-breed between British Shorthairs and domestic cats. Their breeding process was a long and planned out one, but the end result seems to be worth it all. Personality-wise, they are quiet, sweet, and can adapt quite easily to new environments. A notable quality of theirs is that they’re extremely loyal. They tend to essentially bond to one person in the household and it becomes pretty obvious once they’ve chosen their person! Even so, they are not the clingy type and will cuddle on their own terms.

Devon Rexes’ tall ears and slim faces automatically give them a fairy and elf-like look! Their fur is also unique to them. It’s a short, soft, and wavy texture as a result of a mutation. However, Devon Rexes’ furs are very fragile and sensitive. Overgrooming can lead to fur breaking or becoming damaged. They can also have open spots without fur, vulnerable to licking. If you are knowledgeable and equipped to take on these obstacles, having a Devon Rex can be a fun time! They are very energetic, playful, and silly! With this kind of energy, another cat or animal companion can be good to have with a Devon Rex. They are also quite loyal and overall resemble many “dog-like” attributes.

The Sphynx cat probably has the most memorable appearance out of this entire list. Known as the hairless and slim cat, their lack of hair is a natural genetic mutation coming from selective breeding. Their skin can be completely hairless, but can also have small fine hairs along leather-like skin. Their name, as you may already have guessed, comes from its resemblance to the limestone statue in the Egyptian desert. Their appearances can be read as cold-hearted but they actually love and demand attention from humans! They are curious, playful, and very social! They especially love any toy you can chase like lasers or teaser toys. Another bonus is that you don’t have to worry about any shedding in the house!